With shock and dismay I see some pretty awful mid-century kitsch used in design today, and I guess it works in some instances.  Shell kitsch, however, is so bad it’ll never be good. It’s the craftsmanship as well as the tastelessness of the stuff that  makes it so awful. 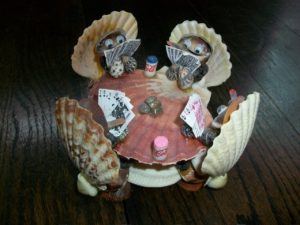 When I tell someone that I make things out of seashells for a living I know what they envision.  They imagine me, bent over a table, gluing little, spotted-cowrie heads on little cowrie bodies to make a shell mouse that can play cards with the other little cowrie-shell mice, all sitting neatly at a flat Scallop table…or making an Easter purse of straw with dyed shells and fake pearls, like the one below. 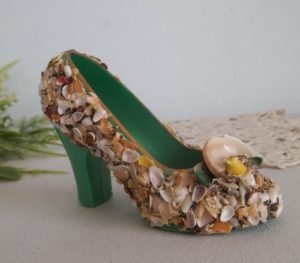 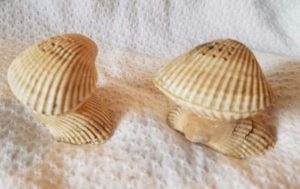 But first I must collect the shells.  More than several people, over the years, have asked me if I collect the shells I use myself.  My atelier, where we make our pieces, has walls and walls of more than one million shells.  So, of course I answer, “Yes”.  I fly to an exotic beach in the wilds of the Philippines on the weekends, combing the sand, free diving and collecting shells, only to be back in the shop Monday, by noon.

What a life. Travelling to breath-taking beaches and crystal seas to hunt for incredible creatures with which to decorate and create wonderful objects.  Sounds like a dream, but between the dream and the reality falls the shadow.  I certainly do bring back interesting things to use in my work from my travels, but nothing as romantic as that.

A lot of awful and hideous things, actually, come from the Philippines.  When one has to make hundreds and hundreds of the same, boring thing it would be hard to keep things interesting.  And, anyway, the point of the exercise is to make all of the things like.  Some pretty nice things come out of the Philippines, nevertheless.  Currey & Co. , a lighting firm, started selling seashell things shortly after I did.  It is a big company that manufactures overseas.  The designers create good-looking objects.  The problems are that they are, one:  common, and, two:  are made by unsophisticated hands.  The things have a tight, rigid feeling, full of tiny, cheap, like shells all in rows, and fit together like puzzles.  Just like the seashell things one buys at the souvenir shop.

The things we make go in so many directions.  We make a mirror, called the “Victorian” that is tight and neat.  Mostly, though, we try and keep the look loose and natural.  My seashell mirrors have more of an organic quality to them, most of the time, and we tend to like lots of texture.  Sometimes the job at hand requires a designed, more quiet hand, which we can have too.  But there is no way that anything from my shop could be mistaken for something made overseas, unless you are thinking of France, Italy or England—and another century.

At Christa’s South we can do anything you want.  We can make our work minimalistic, baroque,  antiqued, loose or extremely organic.  No matter what we do, though, it will be balanced and done with the utmost respect for the project at hand.

These cabana bathroom pictures show both organized shelling and organic.  Note: The beautiful feathering of the scallop shells over the top of the mirrors, which could never be done by an untalented hand. 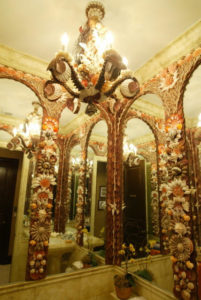 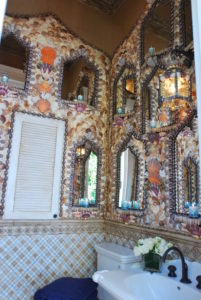 Another difference between my creations and those of mass-produced stuff, is that each shell  is hand-picked, and we use Grade A shells.  Shells are graded just like gems.  Some specimen shells and corals are extremely costly, and getting more so every day.   The US government is guarding many corals with a watchful eye.  We’ve been working for three months to get two pieces of Blue Ridge coral shipped to Canada.  So far we have purchased two licenses, and we have to show where that coral was harvested, by whom, and where it has been before it came to me.  And this isn’t even an endangered coral (I would not sell such a thing).

It is interesting to see all the directions that seashell design can take.  With the individual beauty of each shell it is shocking that sometimes such ugly kitsch is remotely interesting to anyone.  To each his own?