Lots of seashell mirrors dot hallways and powder rooms all around town here, and all over Los Angeles, Long Island, New York City, Chicago… They serve an obvious and “safe” decorating purpose, and are practical. Using shells in an architectural setting can be interesting, and a little more of a surprise than a mirror or even a chandelier. I just takes a little guts, but once you make the decision and the project is completed you will undoubtedly be thrilled, I promise.

We have done quite a few exterior and interior installations, including moldings, ceilings, fountains and entire rooms. Something that is absolutely wonderful and extremely effective is to shell encrust a fireplace, I have done several, and each one so very different from the one before it. 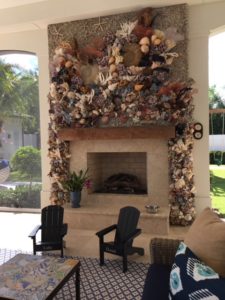 One of the fireplaces was featured in the May-June, 2009 issue of Southern Accents magazine. We actually did a second one for this charming and sophisticated client’s guest apartment. The second one is green and white, neatly done in rows up the side columns like a barber pole. It is simple and fresh. Featured on the top center are just a few magnificent, large shells. 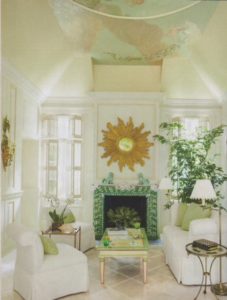 The fireplace we did in her living room is much more organic in design. It, too, has neat borders and is organized, but it is much more free-formed and textural than the other one. Her husband’s 18th century portrait of a relative looks stunning above it. I also designed wonderful white and coral-colored finials for each end of the bamboo curtain rods, from which a light and airy linen drapery hung. The whole thing is very effective against the coral walls. It is not wimpy, which I respect with all my heart. 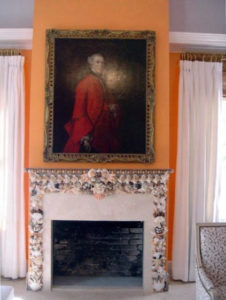 I designed lots of things for one Renaissance man I know. He is a financial genius and businessman on the one side, and has a fantastic design sense on the other side. He has better taste than many designers I know. Both sides of this man’s brain are turning at rapid RPMs all the time.

This wonderful friend invited my son, Roman, and me up to his compound in North East Harbor, Maine several years ago. One of the guest houses is full of my shell creations. The fireplace was done on a panel and sent to him in a crate. It is Moroccan in style. One of my crusty, ancient-looking busts greets guests as they go up the stairway. At the top are two magnificent columns all wrapped in pearled, white snail shells and fancy, rare Turbo Sarmaticus shells from South Africa.

In my own home, a circa 1924 Spanish-style villa in Palm Beach, is the original fireplace. It is cast stone, with Italian-looking scrolls and animals. I made a delicate mosaic of seahorses and a crest between he firebox and the mantle. Everyone adores it–or at least they say they do…

As you see, there are always unusual and different directions the medium of seashells can go. It never ceases to fascinate me. If you want to se a sample of another, completely different fireplace, look behind my desk in the shop and you’ll see one done in a delicate, 19th century style.

Check out our Architectural Gallery and find more seashells designs. Hope to see you soon.