Plato suggested that, of course, Aphrodite (Venus in Rome) is nude because comtemplation of physical beauty allows the mind to understand and inspire intellectual love. Sounds like a line to me. Plato was in the hobby shop.

In Sandro Botticelli’s Venus on the Half Shell (Nascita di Venere) is another sexy beauty nudely standing in the half-clam, with only her hand for a fig leaf. She was possibly painted for Lorenzo Medici’s Villa di Castello, although it was never found in his inventory lists, as was Botticelli’s Primavera. Venus emerged from the sea and brought love to the land. In this neoplatonic age during the Renaissance , the earthly goddess brings carnal love, while the heavenly brings intellectual love. The sea, full of mystery and the unknown, represented Heaven. Venus turns the intellectual to the carnal love as she steps ashore and becomes Primavera. 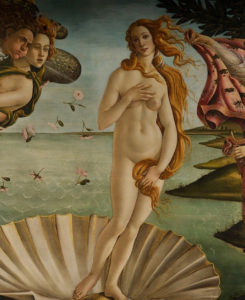 The seashell has had many interesting spots in history. The rare and beautiful purple dye from one snail provided royal color for the ceasars’ robes. The Nautilus shell’s chambers symbolize eternity. The sexy shapes of the shells themselves are most interesting. When my son, Roman, was in Kindergarten at the Palm Beach Day School I brought shells and a frame for the children to make a large mirror for the school auction. The little girls grabbed the smooth cowries, rounded and with a labia-like underside and a slit, and clam shells, while the boys went for the long, pointy cone and whelk shells that had a curiously phallic shape. It is inherent in humans to start a hobby before they even know what the hobby is. 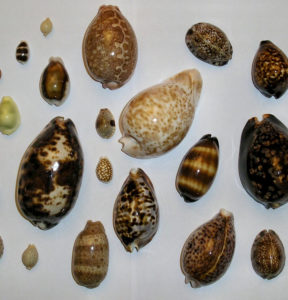 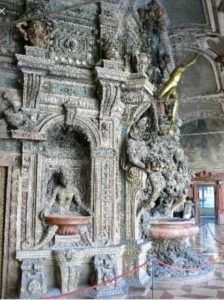 Leave it to the Victorians to turn Venus into a prude, or do away with her completely. Women of this time busied themselves with what was called Fancy Work, which involved either stitchery or doing fine work with seashells fully clothed. The wonderful 19th century Follies in England and Ireland show some of the most elegant examples of fine shell work. France and Italy boast some fantastic shell works as well. 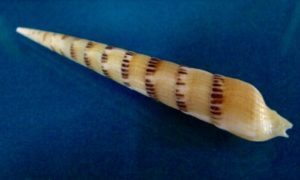 Barbados was a major stopover port for the American and British soldiers from 1830-1880. BH Belgrave, “dealer in Marine Specimen and natural manufacturers in Fancy Work” was the main supplier of shell art, coral jewelry, shark bones and other natural curiosities from the sea. His shop sounded strangely like my own shop. He did custom work, but kept a stock of Sailor Valentines for seamen to bring home to their honeys and wives. It seems to be mostly myth that sailors collected tiny shells and made these romantic memoirs on shipboard during the long, long hours sailing at sea. They most often bought them right at Belgrave’s, with a nice message like, “Ever Thine” or “To a Friend” written in tiny seashells. Often there was a spot to insert a photograph. One wonderful photo was of two sailors on either side of a naked island girl–an extremely racy theme for Victorian sensibilities. I doubt that this particular valentine was brought home to anyone’s honey, but, rather, hidden from such. 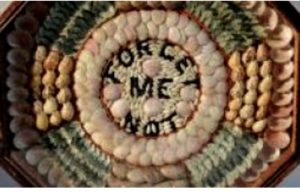 A modern take on sex and the seashell is kinky. Called Nudity and Your Hermit Crab, this idea adds a whole new dimension to “shell porn”. The essay directs one to strip completely naked. Bring out your Hermit Crab from its cage and let it explore the inside of your thigh. “Let the Hermit Crab explore your body,” author Blue Lobster writes. “Spend some time with your crab completely nude,” Lobster suggests. As you explore one another’s bodies you will realize that clothes are similar to the Hermit Crabs shell–“temporary and deceptive…and the shame of nudity is a yoke of societal concern.” I wonder if the crab is as neoplatonic? I don’t think he gives a damn and I don’t think he has a hobby, that crab, but I’m dreadfully afraid that his master does…