Ah, the Pearly Gates of Heaven.  I’m thinking about them because I recently lost a dear friend, and am thinking that he is meeting St. Peter at those very gates.  According to Revelations, the twelve gates of Heaven are each made from a single pearl.  Of course this is symbolic, or the pearls were rather large (or the gates small..).  In Exodus pearl was the stone on the Ephod, representing the tribe of Zebulon.  There were also nine pearls in the Garuda Purana, one of the books of Hindu.

Symbolism in art, literature and nature is the dimension that gives meaning to objects and even intangibles.  Even in the calcified outer skeletons of sea creatures we find meaning, and purpose to their existence.

The unblinking eyes of fish were one of the most important symbols of Jesus in early Christianity.  He is always watching.  In Greek, “Iesous Christos Theou Yios Soter” means “Jesus Christ, Son of God the Savior”.  Take the first letter of each word and it will spell ICTHYS: the Greek word for fish. 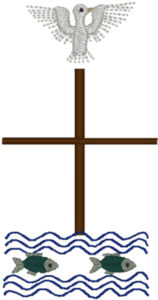 Symbolism is present in the fish renditions of the sacred chapel in the catacombs of St. Callistus in Rome.  Because of the story of the loaves and fishes in the New Testament, the fish has come to represent the Eucharist.  You will see embroideries of fish on the vestments and alter cloths in churches.  In De Babtismo, Tertullian wrote, “But we, being little fishes, as Jesus Christ is our great fish, began our life in the water, and only while we abide in the water are we safe and sound.”

Dolphins were used as the symbol of the Christian himself, rather than of Christ.  The dolphin as Christ is most often seen along with an anchor, which is the cross on which Christ died.

The seashell, especially the scallop, is the symbol of baptism in Christianity.  The baptismal font is often shaped like a scallop, or decorated with one.  The dish used by priests to pour water over the heads of catachumens in baptism is often scallop-shaped.  The scallop, too, is the symbol for the Apostle James the Greater.   St. James used the scallop shell during his pilgrimage to beg for food and water.  Even the poorest people could fill the small shell, so he always found help along his way.  Later, followers of St. James wore the scallop-shell symbol on their hats and clothes and it became the symbol of pilgrimage. 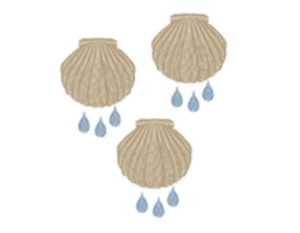 Fertility is also associated with the scallop shell, as exemplified in ancient and renaissance  paintings of Venus, the Roman goddess of fertility and love.  She is often shown coming out of a scallop shell.  Perhaps this is why some pilgrims, walking the way of St. James, used the scallop in a pagan ritual to encourage child-bearing.

The conch shell was one of Buddhism’s eight auspicious symbols, signifying truthful  speech and strength.  It also appears in the Hindu tradition of prayer, and was the weapon of choice of mystical mermaids and mermen, looking up to the magnitude of waves across the ocean.  As such, its mystical meaning  alludes to strength and fortitude. 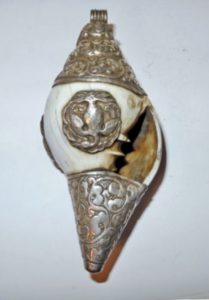 The conch, or shankh, is the most ancient musical instrument known to man.  Obtained as a gift from the great ocean, it was held as sacred, and reference is found all over ancient Indian literature.  It is seen in the hands of almost all gods and goddesses, whenever they were happy or going off to war.    In Buddhism the conch shell’s call is meant to awaken one from ignorance, and is a sign of victory over suffering.  In Chinese Buddhism, the conch shell signifies a prosperous journey, and in Islam it represents  hearing the divine world. 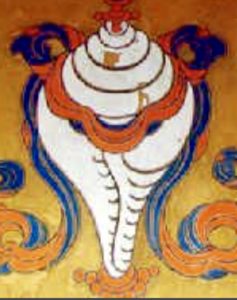 The spiral formation inside the conch is symbolic of infinity.  The space , which gradually expands in a clock-wise direction.  The shell is like the human journey of life.  The hard casing protects life.  The pearl inside (a scallop or oyster), and its aquatic nature associates it with the feminine, lunar, and virginity that is symbolic in music. The conch shell’s spiral form and relation to water cause it to represent the beginning of existence.   This sounds like the place poet William Butler Yeats found his spiraling gyre symbolism so prevalent in his writings. 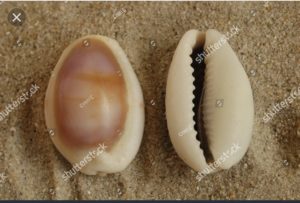 Just look at a cowrie shell and you can guess why it has traditionally been used as a symbol of fertility.  Shaped like labia, small cowries were sewn into the hems of Indian women’s dresses to encourage love and fertility.  I removed them from all my hems after my one and only son was born because he was all I could afford.

Make sure to check out Christa’s accessories and jewelry gallery with conch, cowry shells, scallop designs and more.