﻿When the Dutch started bringing seashells back from travels in the 1550’s, the use of them in art and science was born.

Connoisseurs needed to be supplied with rare species for their Cabinets of Curiosity. Cabinets soon graduated to entire rooms, which appeared, with their magic, in Renaissance gardens, Louis XIV’s Grotto of Thetis at Versailles and Marie Antoinette’s shell cottage erected for her by Louis XVI. Fabulous shell fantasies popped up at Woburn Alley in 1660

Britain, but the major shell blast occurred in 18th century England, France, Germany and Italy. Sans Soucci boasted a fine shell-encrusted room erected by Frederick the Great outside of Berlin, and who can forget the impact of Brighton Pavilion? 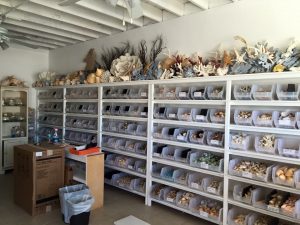 By the late 1700’s brightly-colored shells and corals were more widely available. At the end of St. Katherine’s Dock in London stood a curiosity shop that sold oddities from the sea. Could there possibly have been shells sold in The Olde Curiosity Shoppe of Charles Dickens’ writings? By the 19th century seashells became a medium available to more than just the well to do. Artists, Darwinist scientists and naturalists were collecting shells. Of course, women had the irresistible urge to collect the beautiful shells and decorate boxes, table frames, and seashell mirrors with them. The Victorian women also made arrangements under bell jars. 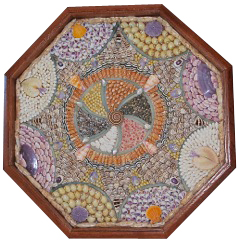 Barbados, in the British West Indies, was home to a couple of curiosity shops that provided souvenirs for travelers to bring home to their loved ones. One was called the Shell Company, which later branched off into fossil fuels and became Shell Oil, still with the scallop shell as its logo.

The other was BH Belgrave, which was the main shop for curiosities from the sea, alligator jaws and other souvenirs, including the Sailors’ Valentine. The lore was that sailors gathered shells during their travels and created these valentines for their sweethearts during their long hours at sea. This romantic notion is nice, but unrealistic. It
would’ve been too unwieldy to do the fine carpentry of frame making, plus bringing along all the accoutrements like tiny hinges, glass and the colored papers required to make these little treasures. Imagine doing such fine work in a sailing vessel rocking in the wind and waves.

No, it was BH Belgrave that did all that, and rather mass produced the Sailor Valentine with vanilla sayings like, “Home Again” or “Love the Giver”. The little shop in Bridgetown could do custom valentines, though, if one had a little time to wait. In past communications I showed a picture of one of these custom valentines with a sailor flanked by two naked island girls. That could have hardly been mass produced! In fact, that particular valentine may have been one of the few made the way we like to fantasize– on ship-board during those long hours–but only because he didn’t want prying eyes to see his intimate work! 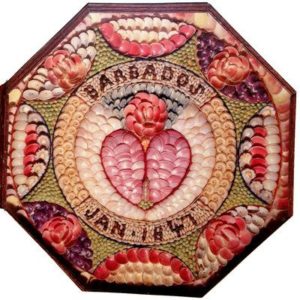 With the advent of kerosene and a dropping demand for whale-bone corsets, among other aspects of changing times, the many whaling ships sailing the seas lessened and demand for such souvenirs dwindled.

In the 1930’s seashell valentines resurfaced, along with the romantic version of how they were made.

In the 1960’s a small revival of the art came to be, and by the late 1990’s there were many who dabbled in the making of the sailor valentines. Today’s works are exquisite. The array of rare and beautiful shells and corals is absolutely breath-taking, and the talent some of these artist have exhibits the hands of a surgeon. I have seen works that took me several moments to even conceive of the dexterity and eye that the maker had in its creation. It is refreshing to see a
contemporary work of art that is so intricate and finer than many of it’s predecessors.

In the last six months I have, after about a dozen years of working with seashells, begun making Sailor Valentines myself. It turns out that, as ADHD and A-type as I am, I love to do it. The first pair I did was for a lovely client of mine who is of English nobility. She actually makes miniature castles and historic room recreations. She had a guest apartment recently redone, and is using the two valentines under an informal dining table with a glass top. One says” Welcome to Palm Beach” in French, and the other, welcome to her home. It is a charming idea and looks so friendly and appropriate, yet very chic.

The first one took me about 100 hours to make. The second one didn’t take quite so long, as I figured out some tricks, and my dexterity improved so I didn’t have to do any parts twice.

I have done a box in the “valentine” style, using minuscule shells with an exacting design, and am also making more specialized table frames than before. I have managed to locate some of the most beautiful miniature shells and corals ever seen, and some of the most costly. I just finished a frame for a 5 by 7″ picture that was so costly I must charge $2,400 for it…but it is not to be believed. The intricacy of the shell and coral designs themselves are heavenly. Big Bang theory or whatever, something can’t come from nothing and these little shells sure make me believe in God. Who else would bother decorating such tiny, unimportant creatures so finely, when all they need is a bit of camouflage? 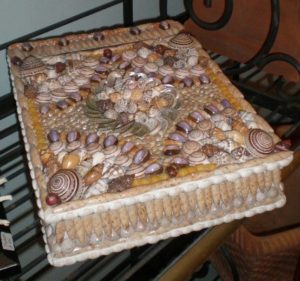 A Sailor Valentine box I made to hold tv remotes.